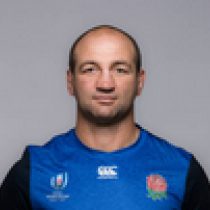 The former England captain is stalwart in the Sarries pack and lead the team to their first ever Premiership title in the 2010/11 season. Borthwick was the linchpin in the Bath side for many years and captained the side to the European Challenge Cup trophy in 2007/8 before joining Saracens, where he was named co-captain for the 2008–09 season alongside Andy Farrell.

His hard work at set-piece and the tight-loose make him a quality second row for Saracens. His leadership and experience are also welcome assets to the club. After a career of 16 years, Borthwick hung up his boots after losing the Aviva Premiership final against Northampton in May 2014.

Borthwick trained as a coach, taking his initial position in-club from 2012 whilst playing with Saracens, and also attending the University of Hertfordshire.

He captained Bath, led Saracens and became a Premiership winner in 2001, as well as representing England Schools, Colts U21 and Saxons. He made 265 Premiership appearances, a record at the time.

Borthwick, who won 57 Test caps and made almost 400 appearances for Bath and Saracens, worked with Jones during Japan's memorable 2015 World Cup campaign that included them defeating South Africa, before joining him last after Jones was appointed as England boss.

England went unbeaten in 2016, claiming the Six Nations title in Grand Slam fashion, beating Australia three times Down Under and then winning all four autumn Tests.

As one of the brightest young coaches in the country he has led the development of England’s forward pack over the last four years. For the 2020 campaign Borthwick will change role from forwards coach to skills coach.

In that period England has won two Six Nations titles including a Grand Slam in 2016, a 3-0 away Test series win against Australia in the same year, an unbeaten run of 18 matches equalling New Zealand’s record and finalists at the 2019 Rugby World Cup in Japan. He also played a similar role on the British and Irish Lions’ tour of New Zealand in 2017 which saw the side draw the Test series against the All Blacks.

In January 2020, England confirmed that Borthwick would leave his role with the national side at the end of the season to take up a role as head coach at Leicester Tigers.