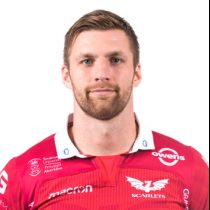 Cummins is a former Australian School boys captain, who went on to feature for the Australian under 20's team in 2010 in the IRB junior World Championships in Cape Town.

He has represented Eastwood, in Sydney, the Eastern Province Kings in the Currie Cup and the Melbourne Rebels in Super Rugby, making 5 appearances for the latter.

He is an imposing figure who can also cover the blindside flank. The dynamic Super Rugby lock impressed and started all fifteen of his Rebels appearances in 2017, playing over 1,000 minutes of rugby.

The dynamic Super Rugby lock signed for the Scarlets in November 2017, joining the club with immediate effect.

He made his Scarlets debut against Benetton in a Challenge Cup encounter.