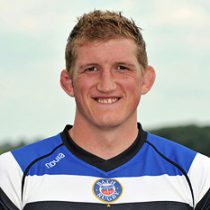 Born in Exeter, England, standing at almost 2 meters in height, Hooper is an imposing former second row forward who developed a reputation as one of the English game's finest tight five forwards.

Educated at Ivybridge Community College in Devon, Hooper broke into the Saracens team as a teenager in 1999 before making a surprise move to Leeds in 2003. Five years later, Hooper left Leeds to take up a contract with Bath where he has appeared as skipper on regular occasions.

Hooper has represented the England Saxons side but did not turned out at full international level. Having joined Bath in 2008, he spent many successful seasons at the club and was forced into retirement in 2016 due to a back injury.

He played 232 Premiership matches of which 138 of those were for Bath.

In late August 2016, he took up the role as Bath's Performance and Player Development Director, working closely with Director of Rugby Todd Blackadder in running the Performance functions of the Rugby department.

On the 7th May 2019 it was announced that Hooper would take on the role of Director of Rugby for Bath at the start of the 2019/20 season, following the departure of Blackadder.