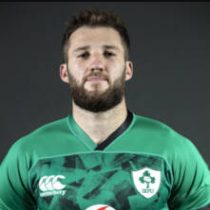 Student of Bangor Grammar School, McCloskey made his breakthrough to the Ulster senior setup in the 2013/14 season.

A powerful ball carrier, McCloskey is mainly deployed at inside centre and has always been considered as a huge talent in Irish Rugby.

Known for his physical stature and powerful running, he had spells at scrum half and out-half during his schools career before gaining the size in his late teens that marked him out as a big ball-carrying centre.

After a great start to the season in the 15/16 campaign, McCloskey was chosen in Ireland's 6 Nations squad in 2016.

He won his solitary Irish cap in the 2016 Six Nations Championship playing in midfield against England.

In May 2016, Stuart signed a contract extension with Ulster until 2019.

Stuart was selected in the Ireland squad for the opening two rounds of the 6 Nations.

The centre signed a new three-year deal with Ulster ahead of the 2018/19 season and went into the new campaign with 82 caps for Ulster to his name and 3 appearances for Ireland.

In January 2020, he was added to Andy Farrell’s Ireland squad for the 2020 Six Nations.

Ulster Rugby Player of the Year 2019