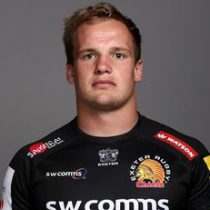 Stuart Townsend controls the scrum and open play and as any scrum half would has an eye for the try line. He has represented England u18 scoring 5 tries in his first 5 appearances.

Stuart spent the 2016/17 season on dual registration with Cornish Pirates and Exeter Chiefs.

In February 2019, he committed his future to Exeter Chiefs until at the least the summer of 2021 with a new two-year deal.