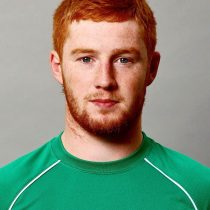 Leader played for the Connacht Academy and helped the province to a U20 championship.

He represented Ireland at the Under-19 and Under-20 levels before making multiple appearances for Connacht A in the British and Irish Cup before moving to Italy to play for club Rugby Badia ASD.

His younger brother, Darragh, is a long time contributor to the Connacht senior team in the Pro14.

Leader has long been a player and coach with the Boston Irish Wolfhounds while in the US over the years, and in the fall of 2018, he graduated from Lindenwood University in St Louis, MO, with a degree in sports management while also competing and coaching with the St Louis Royals Rugby Club.

Captaining the San Diego Legion in the 2018 inaugural MLR season, he led the team as the top points scorer and a semi-final appearance.

He became USA National Team as Eagle #532 after being capped in the 2019 Americas Rugby Championship for the US Men’s National Team against Chile, scoring his first try in many more to come moments after coming onto the pitch.

In August 2019, he was named in the New England Free Jacks squad for the Major League Rugby tournament.