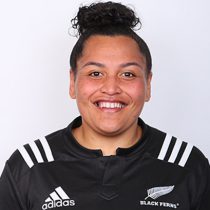 Strong at the set-piece and aggressive with and without the ball, Te Kura NgataAerengamate is an established and important member of the Black Ferns.

Debuting in 2014, she has hardly since missed a Test match. All eight of her international appearances in 2017 were in the No 16 jersey. She crossed for a try in the 45-12 Women’s Rugby World Cup semifinal win over USA in Belfast.

In 2018, she started from the bench in the first four Tests of the year before missing the final Test match against France.

She made her Auckland Storm debut in 2012, before switching to the Counties Manukau Heat, from where she won the 2016 Farah Palmer Cup title.

Te Kura has also represented the Cook Islands in rugby league in 2017 and heads into the 2019 Super Series with 23 test caps.