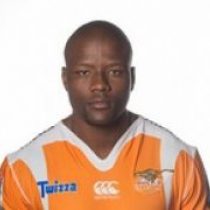 'Oupa' Mohoje is a versatile forward who covers both flank and lock. Mohoje had a rollercoaster of a year in 2014 that saw him captain the University of the Free State in the Varsity Cup and later representing the eFree State XV in the Vodacom Cup.

His career took off from there as an injury crisis saw him being called into the Cheetahs Super Rugby squad. That same year he earned his Springbok call-up ahead of the June internationals. He made his debut against Scotland in Port Elizabeth.

In 2016 he was a genuine starter for the Cheetahs and was named in the South African "A" squad ahead of the matches against the England Saxons.

He regained a spot in the Springbok senior squad before the Rugby Championship and went on the end of year tour to Europe.

In May 2017 he was named in the Springbok squad that would face France in a three-match test series.

Mohoje started the opening tests of the year against France but missed the last one through injury. His injury ruled him out of most of the Rugby Championship.

He returned from injury and made his Pro14 debut in the Cheetahs historic victory over Leinster.

He was recalled into the Springboks squad for the end of the year tour to Europe and looked to add to his 17 Test caps.

Mohoje made one appearance for the Boks during the end of year tour and once again was named in the Springboks squad for the 2018 June Internationals.

In July 2018, he was named the new Cheetahs captain ahead of the 2018/19 Pro 14 season, having represented the side on 16 occasions in the competition.

Following 78 appearances since joining the team in 2013, Mohoje signed a new deal with the PRO14 outfit in June 2020.