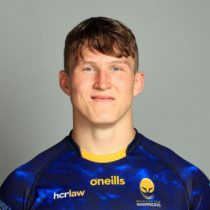 Hill is a product of the Warriors AASE programme, having studied at Worcester Sixth Form College, and featured for Worcester Cavaliers in the 2015/16 and 2016/17 seasons.

The forward has already impressed on the international stage, having represented his country from Under 16 to Under 20 levels. At the age of just 17 he was part of the England Under 20s squad which won the Under 20s Six Nations Grand Slam in 2017.

He also led Warriors Under 18s to their fifth-place finish in the Premiership Rugby Under 18 Academy Finals Day, as they defeated Saracens at Sixways in February 2017.

He was once again named in the England u20s squad for the remainder of the 2017/18 season and, following a great season, earned an England call-up ahead of the November Internationals

In December 2018 he signed a first-team contract with Worcester Warriors and was included in England’s U20 Six Nations squad in 2019.

He was capped by England as a replacement against Japan before committing his future to Warriors until the end of the 2021/22 season.

Hill was included in England's 2020 Six Nations squad,however, he did not take the field.