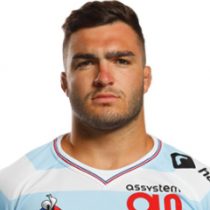 Teddy started rugby at the age of 13, joining Meaux. After a season in Seine-et-Marne, he signed to Racing 92 in 2013.

Since then, he has not stopped progressing and proved to be one of the most talented young people in Racing training.

Teddy is extremely present and possesses great mobility on the ground.

Taking advantage of Camille Chat's absence, he made his first steps in TOP 14 in November 2016, facing Montpellier, when he was only 18 years old.

After two complicated seasons due to injury, he made a great 2018-19 season with 20 games played.

Early in 2022, it was announced that Baubigny had signed a 4-year contract with Toulon.