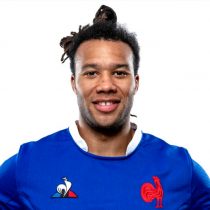 Son of a Malian father, Thomas was born in the small county of Biarritz in south-western France on the Atlantic coast. He joined the Biarritz underage set-up after playing for the French U18 team.

Thomas received his first Test appearance against Fiji in November 2014, scoring a hat trick of tries at the Stade Velodrome. He scored in his next game against the Wallabies to continue his fast start to international rugby.

It was no surprise when he was selected for the 6 Nations squad in early 2015 having scored four tries in his opening two games for his country before missing out on 2015 RWC selection.

Thomas was a member of the Racing 92 team that won the TOP 14 title in 2016 & also lined out once again for the French in the 2016 Six Nations against Ireland.

Ahead of the 2018 Six Nations tournament, Thomas had represented France on 8 occasions. The speedster scored 3 tries in two appearances for France during the competition. His form continued with his club as he helped Racing 92 to the Champions Cup Final and was named as a nominee for the ECPR Player of the Season..

In September 2018, he was nominated Best International Player for France ahead of the Nuit du Rugby ceremony in France.

He was omitted from the French squad to prepare for the Rugby World Cup in Japan. He returned to the France Six Nations squad in 2020 looking to add to his 16 caps and 10 tries.

In May 2021, he pledged his future to the French club with a new contract extension.