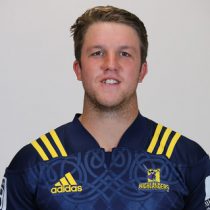 Originally hailing from Taranaki, Tei Walden has worked his way through the Otago Academy and age group sides to join the Highlanders' Wider Training Group for the second season.

As a strong-running midfielder, Walden was selected for the New Zealand U20 team that played in the 2013 Junior World Championship. A young player who has the ability to go further, Walden will undoubtedly benefit from time in the Highlanders environment and is certainly one to watch for the future.

Walden made 6 appearances for the Highlanders in his debut season and has been included in their squad for the 2017 season.

He made another 3 appearances for the Highlanders during the 2017 Super Rugby season and played a full 80 minutes against the British & Irish Lions.

Following an impressive run of form with Otago in the Mitre 10 Cup, Walden was named as one of 10 uncapped players in the Maori All Blacks squad.

In May 2018, he signed a new two-year deal with the Highlanders ahead of the 2019 Super Rugby season.

Walden made 15 appearances during the 2018 Super Rugby season scoring 7 tries and has since returned to his home base in Taranaki for the 2018 Mitre 10 Cup season.

He should be a regular starter for Taranaki in the Mitre Ten Cup after a fantastic Super Rugby season in 2019 with 10 games under his belt after earning a regular starting spot in the side.

Walden heads into the 2020 Mitre 10 Cup having made 20 appearances for Taranaki.