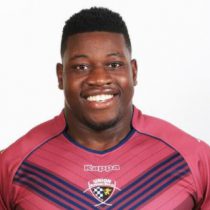 Not selected at youth level for France, Paiva caught the eye of Bordeaux in the PROD2 and signed for the TOP14 club ahead of the 2017/18 season.

Under the mentorship of former French International and club captain Jefferson Poirot, Paiva sharpened his game and had a breakout season in 2020/21.

His form did not go unnoticed as he was called into the French senior squad as an injury replacement ahead of the 2021 Six Nations.

He will be looking to make his test debut for Les Bleus.