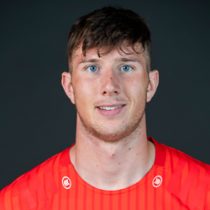 Ahern earned a late call up into the Ireland U20 squad for the 2019 World Championship and made his debut in the final pool game against Italy.

Over 2m tall you would expect him to play in the forwards where he has been converted to. He was moved into the pack just 2 years before his Ireland debut where he played in the backs.

The Munster Academy man made his debut for the province at the Cork ground in a pre-season friendly against London Irish.

Ahern became one of the stand-out performers through Ireland U20’s two bonus point wins in the 2020 U20 Six Nations.