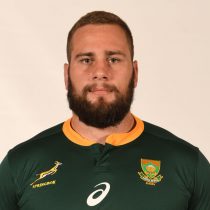 Thomas joined The Sharks Academy just after playing representative rugby at Under 16 and Under 18 age group level for Western Province and then gaining selection to SA Schools.

He immediately made an impact at Sharks, playing in the Super Rugby Competition at the age of 19 years old.

He featured prominently at the IRB Junior World Championship that year when South Africa were runners-up before enjoying his Currie Cup debut later that season.

October 2016 saw Thomas join Irish Pro12 club Munster on a 3-month contract, making his debut the following month as a replacement in the sides 46-3 win against Treviso in a 2016/17 Pro12 fixture at Thomond Park

Du Toit returned to the Sharks ahead of the 2017 Super Rugby season, having made over 20 Super Rugby appearances since his debut in 2014 against the Cheetahs.

In November du Toit was called up to the Springbok squad as injury cover but did not make an appearance.

Able to play both sides of the scrum with equal destructive force, Du Toit went into the 2018 Super Rugby season, having played all 16 of the Sharks 2017 Super Rugby matches, scoring 4 tries.

In May du Toit was named alongside 16 other uncapped players in the Springboks squad to face Wales and England.

He went into the 2018 Rugby Championship with 4 test caps.

In September 2019, he was called into the Springboks squad as an injury replacement for Trevor Nyakane, who tore his right calf in the 23-13 defeat by New Zealand in Yokohama.