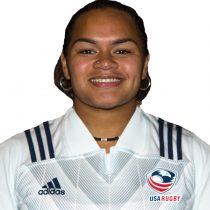 Tiana A'au picked up rugby at the age of 13 when she and her twin sister followed behind their two older rugby playing sisters.

A multi-sport athlete, A'au has lettered four times in high school and was a two-time wrestling state champion and a two-time PIL Female Wrestler of the Year. She also ran track & field and played an array of other sports including volleyball, softball, basketball and soccer.

As in other sports, A'au excelled in rugby, being named a 2016 High School, 2017 Junior and 2018 Collegiate All-American. Competing in several All-American competitions, the athlete had an opportunity to play with her twin sister and older sister during the 2018 Women's Junior All-Americans U20 Tri-Nations Cup. There, her performances impressed senior national team staff who selected her to join the Women's National Team (15s) for their Autumn Internationals 2018.