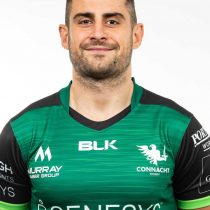 Born and reared in Clifden, and having come through the ranks of Garbally College, Galwegians and the Connacht academy, O’Halloran has flourished with the province at full-back.

In his first year with a development contract, 2011-12, he played 21 league games and scored five tries, having scored their first try in the Heineken Cup, was an ever-present in their first two campaigns in that competition.

This followed with a few injury disrupted seasons that halted his progress.

O’Halloran represented Ireland at Schools and Under-20 level in 2012, he was chosen to train with the Irish Six Nations squad due to his impressive Connacht form.

He has been an integral part of the Connacht story and was heroic throughout the 2015/2016 Pro12 season with Connacht as they clinched their first piece of major silverware, operating at full-back - O' Halloran scored regularly which help guide the western province to the summit of the table.

After missing out on initial selection for the South Africa summer tour in June 2016, he was named as an injury replacement and went on to make his Ireland debut, starting the 3rd test as Ireland narrowly lost.

In November 2016, O'Halloran was called up to the extended Ireland squad for the November Internationals. The Connacht man was named in Ireland's summer tour to USA & Japan.