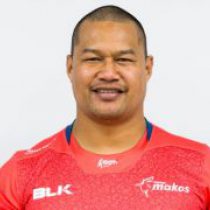 Paulo was the foundation captain of the Makos and played nine games in their inaugural 2006 season.

He played for Canterbury and the Crusaders before making the move to France in 2010 playing over 100 matches for Clermont & also spending a season with Lyon.

He has played Test rugby for Samoa and returned to New Zealand in 2017, playing with Renwick in the latter stages of the Marlborough club competition.

Following his seven year spell in Europe, Paulo re-signed with the Makos for the 2017 NPC season. The 34-year old hooker returns to Tasman, eleven years after making his debut for the province.