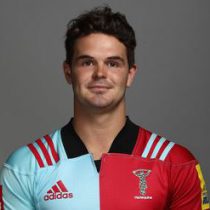 Having being included in the S.A. Schools side in 2011, he was also included in a S.A. Under-20 training squad, but later ruled himself out of selection for the 2013 IRB Junior World Championship.

Under IRB rules, playing for the S.A. Under-20 team would have made him ineligible to play for another international team, but as a British passport holder, Swiel wanted to keep his options open and did not yet want to commit his long-term international future to South Africa.

He joined the Natal Sharks at the conclusion of the 2013 Currie Cup Premier Division season.

Joining Harlequins in 2014 on loan from the Sharks, Swiel made his debut in what was then the LV Cup. Making ten appearances during his four-month loan spell, he returned to the Sharks following impressive performances against Leinster, at the Aviva Stadium, and Northampton Saints.

October 2016 saw him re-sign with the London-based club. Swiel made 48 appearances for the Harlequins including 30 in the Premiership and a further 12 in Europe.

In October 2018, he signed a deal with Newcastle Falcons and joined the club immediately.

Swiel helped Newcastle gain promotion back into the Premiership before returning to South Africa in 2020 where he turned out for club sides in the Western Cape.

In May 2020, he was brought into the Stormers and Western Province set ups for the Super Rugby and Currie Cup seasons.