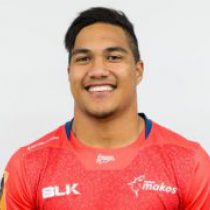 A fast and agile winger, Tima had a promising debut season for the Makos in 2016 following his time highly successful schooling at Nelson College.

The Tasman Makos player was a member of the Baby Blacks side that won the 2017 U20 World Rugby Championship in Georgia.

Tima represented the Crusaders Knights and Tasman U18 teams which led to a selection for the Tasman men's 7's in Rotorua.

The older brother of Leicester, Lotima was drafted into the Highlanders 2020 squad late after Connor Garden-Bachop picked up a season-ending injury.

He had a brief stint in Perpignan during 2018 and has ventured south after injuries in the Outside backs.

Tima heads into the 2020 Mitre 10 Cup season with 36 appearances for Tasman Makos.