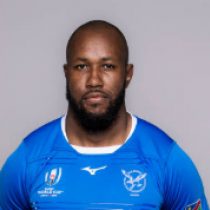 Uanivi can play either second-row or flanker, and has played in some of the top divisions of world rugby including the Top 14, Super Rugby and Guinness Pro 12.

The versatile forward has earned 15 caps for his country so far after making his debut in 2014, and those appearances include the 2015 Rugby World Cup in England.

In July 2017, he signed for Championship club London Scottish.