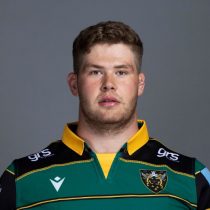 Prior to joining the Saints Senior Academy, prop Toby spent twelve years at Ipswich RFC. Whilst there, Toby was called up to the England Under-15 regional development camp at Loughborough University in 2013.

The loose-head prop had already represented England at U17 and U19 level when he received his first call-up for the England U20 side in January 2018 for that year’s Six Nations.