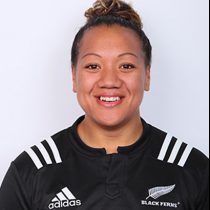 Toka Natua final match for the Black Ferns in 2017 she crossed the line no less than three times and went a long way to clinching the Women’s Rugby World Cup.

Natua’s first international hat-trick came at just the right time, and in the space of just 20 minutes, of the WRWC final against England.

It left the loosehead prop with five tries from 16 Tests and the eternal gratitude of a nation.

Relatively late to first-class rugby, at the age of 22, Natua has played 21 games for Waikato since 2014, several at No 8 in a nod to her strength and mobility.

Her early form attracted the attention of the Black Ferns selectors and she made her Test debut in the Super Series of 2015. In 2017 she was one of 11 players to appear in all eight internationals, which included six starts in the No 1 jersey.

Heading into the 2019 season, she has 16 test caps and has scored five tries.