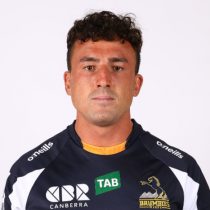 Banks enjoyed a rapid rise through the Queensland ranks since storming onto the club scene in the BLK Queensland Premier Grade with the University of Queensland in 2013.

He was selected for Queensland U20 a year later, whilst part of the Reds wider training squad, and went on to make his Super Rugby debut in 2015 as a late replacement in the Round 5 clash against the Brumbies at Suncorp Stadium.

Banks was a stand-out member of the Queensland Country side in the 2016 National Rugby Championship, including putting in a superb individual performance in a clash with the University of Canberra Vikings crossing for a brace of tries against the local side.

He signed for the Brumbies in November 2016 following his two Super Rugby Caps with the Queensland Reds.

He made an immediate impression in Canberra, appearing in ten games in his debut season with club and establishing himself as the first choice Fullback in the capital. Banks scored three tries and set up many more with his pace and footwork proving to be real assets for the side.

The ability to spot a gap, and the sheer acceleration to exploit it, has made Banks into one of the most feared strike-runners in World rugby, something that is now being recognised on the international scene with the Brumbies star likely to be in and around Wallabies selection for many years to come.

Banks earned his test debut against the All Blacks and narrowly missed out on a place in the Wallabies Rugby World Cup squad having earned 6 caps before the competition.