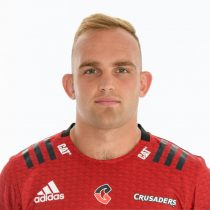 Christie spent three seasons playing for Shirley Boys’ High School in the Crusaders region secondary schools competition - now the UC Championship – and captained the side in his final year at school. He joined the Crusaders Academy in 2016 after representing the New Zealand Secondary Schools’ team. Christie’s other representative honours to date include Canterbury Under 19, Crusaders Knights, and New Zealand Under 20

Christie captained the 2018 New Zealand Under 20 team, after being a member of the World Championship winning team a year earlier.

In 2018, Christie was named in the Mitre 10 Cup squad for the first time, but he already had one first-class cap to his name – a 2017 Premiership Final appearance. Christie took the field with five minutes to go in the 2017 Mitre 10 Cup Final against Tasman, to not only earn his first appearance in the red and black jersey, but a Premiership winners medal as well.