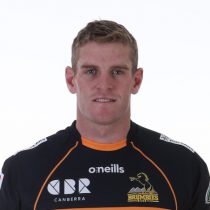 Having previously represented Australia at the Schoolboys and under-20 levels, Tom was brought into the Australian Sevens squad for the Wellington 7s in 2013, and quickly established himself as an asset with ball in hand.

He has also represented Australia in the 2013 Junoir World Championship scoring 2 tries, and was a squad member in the 2014 Commonwealth Games in Scotland.

After a three-year stint in the Australian Sevens program, Tom signed a one-year deal with the Brumbies for 2017.

Another consistent Super Rugby season saw Cusack become an important member of the Brumbies all-action, attacking style, with his ability to support and gather offloads a massive reason why the Brumbies were able to shred defences in 2019.

Playing fifteen matches, and upwards of 1,000 minutes of rugby Cusack, who debuted for the club in the 2017 fixture against the Rebels in Melbourne, was instrumental in both attack and defence and even found time to cross for his third Super Rugby try.

Cusack enters Super Rugby 2020 with 33 caps under his belt and looks set to link up with the Sevens for the Tokyo Olympics.