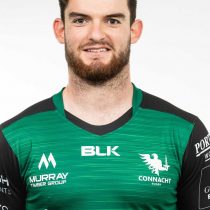 Daly, a Carlow native, came through the Leinster Academy which resulted in signing on professional terms with the province. He also featured for the Leinster A side in the British and Irish Cup, winning 4 caps.

During his days playing for Lansdowne, he was named captain for the Ireland Sevens side that narrowly missed out on qualification for the Rio Olympics.

A former Knockbeg College student, Daly made his senior debut at outside-center against Zebre while also scoring a try.

In April 2017, after an impressive start to his Leinster career, Daly signed on with the province for the 2017/18 season, earning 12 caps scoring two tries.

In December 2018, Daly joined Connacht on a loan deal and made his debut in the inter-provincial derby with Munster at the start of January.

The centre went on to make six further appearances in a Connacht jersey, scoring a try against the Glasgow Warriors in February before signing a new contract with the province ahead of 2019/20 season.

As of June 2020, he has made 24 appearances for the Irish province.