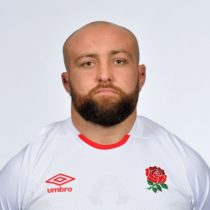 Dunn entered the books at Bath since he was 15 and made the transition from Academy to Senior Squad in 2015.

He had to serve a proper apprenticeship going out on loan to Chippenham, Bournemouth, London Scottish and Rotherham as well as training as a butcher at Ruby & Whitein Clifton.

In the 2012/13, Dunn's impressive performances at loosehead prop in the A League for Bath United convinced 1st XV coaches that he had all the necessary requirements to play at hooker.

Studying at University of Bath, Dunn made his debut in December 2012 as a substitute after switching from prop to the middle of the front row.

He made his starting debut later that season against Bucharest, scoring a try in the process.

In October 2016, he signed a long-term contract with Bath Rugby, bringing with him his strong defensive and scrummaging skills to the pitch, as well as a huge work rate.

Eddie Jones named Dunn as one of 8 uncapped players in his 35-man squad or the 2018 Six Nations opener against Italy.

Ahead of the 2020 Six Nations, the uncapped Dunn was included in the England Squad for the Barbarians game and final round of the Six Nations