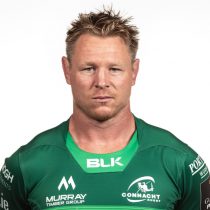 McCartney started his professional rugby career in 2007, with a start in the NPC for North Harbour against Thames Valley. In 2008 he was given a place in the Blues squad for a match against the Chiefs. It was April 2009 though, before McCartney got his first Super 14 start against the Queensland Reds.

His dominant presence on the field never goes unnoticed and his 105kg frame with great agility make him a difficult man to take down. In 2014, McCartney left the Blues and signed a 3 year deal with Connacht.

Having celebrated his 50th Connacht appearance with a Man of the Match performance and two tries against Benetton Treviso in the Guinness PRO12, McCartney secured his place at Sportsground with a 3-year extension until at least the summer of 2020.