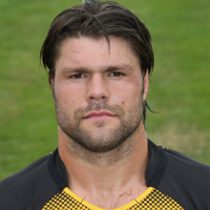 Born in London, Palmer spent his formative years in Kenya and also spent a brief period in New Zealand, attending Otaga Boys Highs, and was selected to represent the New Zealand schools. Palmer also spent a brief period living in Scotland and represented their U19 team, but his allegiances were switched to England, whom he represented initially at U21 level. The towering lock attended University in Leeds and subsequently signed for the Leeds Tykes, being part of the squad who advanced from the National Division 2 to the Premiership. Whilst a Leeds player, Palmer won his first England cap as a replacement for Steve Borthwick in a 2001 test against the United States. Tom spent nine years at Leeds, before, in 2006, he moved to London Wasps. Palmer spent three trophy laden seasons with Wasps’, winning the 2006-2007 Heineken Cup as well as the 2007-2008 Premiership. After three years in London, Tom opted to join Stade Francais in 2009. To date, Palmer has won 41 caps for England.