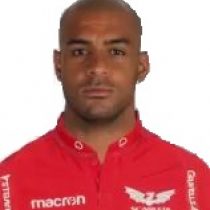 Electric pace and dazzling footwork have allowed Varndell to develop into one of England's top wingers since beginning his career with Leicester Tigers as a teenager. First signed in 2004 for the Tigers, Varndell burst onto the scene with the Premiership's fastest ever hat-trick in just 13 minutes.

2005 was an historic year for Varndell as he broke into the England senior and sevens squads in the space of five days. A graduate from The Volston College moved to London Wasps in 2009.

Varndell refound his form having been performing poorly prior to his 2009 move, starting the 2013-14 season as Aviva Premiership's third all-time top try scorer with 75 tries, behind the retired Steve Hanley (78) and the current all-time leader, Sale Sharks wing Mark Cueto (90).

After that accolade, Varndell moved to Bristol Rugby, competing in the RFU Championship for the 2015-16 season.

He kept his impressive form and was named Aviva Premiership Player of the Month for December 2016, beating his team-mate Woodward and Wasps back-rower Thomas Young to the big prize.

In March 2018, Varndell signed for Scarlets on a short-term deal, a deal that was followed by a two-year contract at Pro D2 club Soyaux Angoulême.

Varndell and Soyaux Angoulême parted ways in December 2018. Later in that month, he re-joined Leicester Tigers he last played for Tigers in the Premiership semi-final win over Bath in May 2009 and scored 65 tries in 113 appearances for the club. He is also Premiership Rugby's record tryscorer with 92 in top-flight rugby.