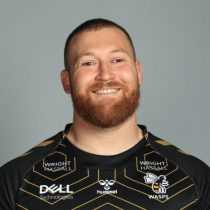 Loosehead-prop Tom West worked his way through Wasps’ Junior Academy while a pupil at Radley College prior to joining the Senior Academy in 2015.

West spent the 2015 season on loan with National League One side Henley Hawks, before enjoying a successful World Rugby Under-20 Championship with England.

In August 2016, West signed up with the Nottingham Rugby, for the 2016/17 Greene King IPA Championship campaign.

After impressing in the A League and Anglo-Welsh Cup, West made his senior bow during the course of a 2017/18 campaign which ended with the award of a first senior contract for the following season

West received his first call-up to the England senior squad in January 2021 ahead of that season’s Guinness Six Nations.

In February 2022, he signed a new deal with Wasps, having made close to 50 appearances for the side.