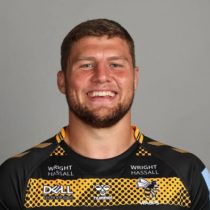 The Wasps Senior Academy No.8 is the younger sibling of openside Jack, who lifted the JWC with England U20s in 2016.

The bruising back-rower played a key role in Wasps' march to the U18 league finals.

Willis was named England U18 captain for their 2nd game of their summer ‘U19 International Series’ and went on to make his Premiership debut against Saracens on 8 October 2017.

He has also demonstrated his leadership abilities by captaining England U18s against Wales during their summer development tour to South Africa in 2017.

He then earned his first call-up to the England U20s squad in January 2018 and was included in England’s U20 Six Nations squad in 2019.
Willis also impressed in the 2019 World Rugby Under 20 Championship in Argentina – scoring three tries, including an 80th-minute match-winner against Ireland.