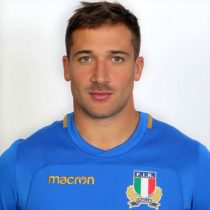 The young versatile back played in the 2010 Junior World Championship. He has made great strides since then, signing with Benetton Treviso in 2009.

He was called up to represent the Italian senior international side in 2010. He played against Argentina in the Autumn internationals of that year after impressing against Leicester and Perpignan where he scored 4 tries in 3 matches.

A junior player with Treviso he made his senior debut for them in November 2009 against Venezia. His PRO12 debut came against Scarlets in September 2010 scoring a try in Treviso's first ever game in the tournament.

Benvenuti made his 6 Nations bow against Wales in Rome 2011. He played in Italy's next 12 matches in the Championship, scoring his only try vs England in 2012.

He started all four games for Italy in RWC 2011, scoring 2 tries vs Russia, then played three more games in RWC2015

Tommaso made the journey across the Channel, joining Greene King IPA Championship side Bristol in January 2015.

He was once again included in Italy's 6 Nations squad and reached the 50 test milestone.

As of December 2019, he has represented Benetton 68 times and has scored 25 points.