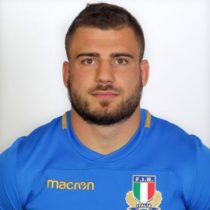 Born and bred in Genova, Castello emerged at junior level from CUS Genova, the local University rugby side, but established himself as a top-class Italian centre since joining Rugby Calvisano in 2011 as a 20-years-old.

A member of the Italy Under-20 that competed in the 2011 Under-20 Six Nations and former captain of the Italy Emergenti Squad, he was invited for the first time to join the Azzurri setup ahead of the 2016 Six Nations by former coach Jacques Brunel.

With the yellow-and-black side from Brescia he won three consecutive Italian Championships and two Italian Cups, becoming one of the team leaders and gaining the attention of Zebre.

He first landed in Parma as a permit player during the 2015 Rugby World Cup window and then signed his first professional contract last summer.

He was then selected in the starting XV for the very first game of this season in Cardiff and became involved on a regular basis in the Zebre midfield.

At more than 100kg, Castello loves to hit straight runs into defensive lines, his ability to break the first tackle makes him a reliable options at inside centre, while he is adept at defending across the field.

He made his international debut under Conor O’Shea during the 2016 summer tour of the Americas, he has since made 4 other appearances for the Azzurri and has been included in 2018 6 Nations squad.

Castello, included in the 2019 Six Nations squad, has had 5 previous 6 Nations appearances. He has yet to score any points.