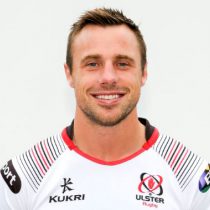 The Monaghan man made his professional debut for Ulster at the end of the 2003–04 season, scoring on his debut against Connacht and soon made his name as an Ulster regular. He won the Guinness Ulster Rugby Personality of the Year Award at the Ulster Rugby Awards Dinner in May 2005.

And in 2008, he won both the Ulster and Ireland Player of the Year awards. However on 25 January 2008 he confirmed that he would leave Ulster at the end of the 2008 Celtic League season, to join the Ospreys on a two-year deal.

He went on to spend four successful seasons at The Ospreys, earning 77 caps and scoring 180 points, before returning to his native Ulster in 2012.

Bowe made his senior international debut against the USA during the 2004 Autumn Internationals.Bowe played a huge role in Ireland's 2009 Six Nations victory and in 2010 he was voted Six Nations Player of the Championship.

He was a key member in Ireland's 2011 World Cup Squad and he was also selected for two British and Irish Lions tours, the South Africa tour in 2009 and the tour of Australia in 2013.

He also formed an integral part of Ireland's back to back Six Nations titles in 2014 and 2015. Bowe has been one of the top wingers in world rugby for the past number of season's, so it came as no surprise when he was named in Ireland's 31-man squad for the 2015 Rugby World Cup.

In January 2018, Bowe announced that he will be retiring from professional rugby at the end of the 2017-18 season.

2010 Six Nations Player of the Championship