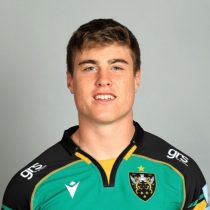 Versatile back Tommy Freeman was first noticed by Saints’ coaches while studying at Moulton College, and linked up with the Club’s Junior Academy midway through the 2018/19 campaign.

Featuring for Saints’ Under-18s for the rest of that term, Freeman signed his first full-time contract and joined the Senior Academy ahead of the 2019/20 season.

He made his debut for Saints against Sale Sharks in the Premiership Rugby Cup during the 2019/20 season.

He scored a try against Leinster in the preseason before making his Club debut in the Premiership Rugby Cup against Sale Sharks.

After making 8 appearances for the Premiership club, he signed a contract extension in March 2021.

Freeman's form in the early stages of the 2021-22 Premiership was such that it earned him a call-up to Eddie Jones' England squad for the 2021 Autumn internationals.