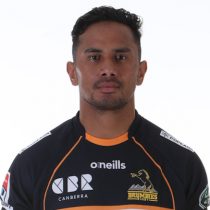 Known for his blistering pace on the wing, Toni Pulu was born in America and moved to New Zealand at the age of 3.

The pace merchant attended Dilworth School in Auckland and went on to play club rugby at Bombay in the Counties Manukau local leagues in the suburbs of Auckland.

His form with Bombay impressed the Counties Manukau coaching set up and he joined the side ahead of the 2012 ITM Cup. He immediately became a regular starter on the wing and his impressive performances helped them become established in the ITM Cup Premiership Division.

He scored 2 tries in 9 appearances in the Steelers first season in the Premiership in which they finished up in 4th place on the log before being thrashed 41-10 by Wellington in the semi-finals.

As a result of 3 years of impressive domestic performances for Counties Manukau, Pulu earned a spot in the Chiefs wider training group for the 2015 Super Rugby season. Injuries prevented him from playing during his debut season in Hamilton, but he was retained in the wider training group for 2016. While still in the Wider Training Group, Pulu made his debut for the Cheifs in the 53-10 win over the Western Force in March 2016. He was called in from the bench due to the number of injuries the Cheifs have received in the 2016 season and scored a try in this appearance.


In September 2016, he extended his contract with the side until 2018. Pulu made 8 appearances for the Chiefs during the 2017 Super Rugby season scoring 5 before sustaining an injury against the British & Irish Lions which ruled him out for the remainder of the year. Pulu took his Super Rugby appearance tally to 32 by the end of the 2018 Super Rugby season.

At the conclusion of the season, he signed a two-year deal with the Brumbies and will cross the Tasman following the conclusion of the Mitre 10 Cup season. Pulu holds an Australian passport and was immediately eligible to play for the Wallabies thanks to a dispensation granted by World Rugby despite having previously played sevens for Niue.

He joined the Brumbies for 2019, having scored four tries in 11 games last year for the Chiefs. Pulu’s first season was stunted before it got going with the winger being ruled out for six weeks with a facial injury, ten minutes into Round One.

Pulu recovered, and once he got back into the side, he was electric. Pulu was a constant threat, and his break and assist to Tevita Kuridrani away to the Crusaders was one of the most memorable moments of 2019.

He scored one try in 12 appearances for the side.