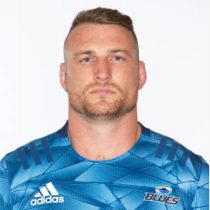 Lamborn debuted for the Magpies in 2013, however it was in 2015 when his performances really started to catch the eye.

He was named as Hawke's Bay's 2015 MVP as they won the ITM Cup championship with a 26-25 win over Wellington which saw them promoted to the Premiership in 2016.

He was then named as a member of the Hurricanes wider training group ahead of the 2016 Super Rugby season.

In January 2017, he was named in the USA squad ahead of the 2017 Americas Rugby Championship.

In May 2017, Tony was named in the USA Men's Eagles squad for the Emirates Airline Summer Series and Rugby World Cup 2019 Qualifiers this June and July, with 5 caps to his name.

Lamborn represented San Diego Legion in the maiden Major League Rugby Season before he returned to New Zealand to feature for Southland in the 2018 Mitre 10 Cup.

Lamborn has brough a vast amount of experience to the Blues loose forward unit for the 2020 season.