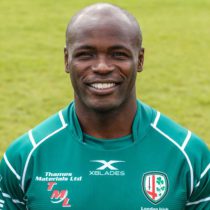 Born in North London, Temitope 'Topsy' Ojo has evolved into a skilful winger come centre since his debut for London Irish in 2005.

Having shone as a junior in the London Irish academy system, Ojo was promoted to the senior squad and with pace to burn, impressed from the offset.

A quality season in 2007-08 earned Ojo a call up to the England national set-up where he made his debut in the summer tour of New Zealand.

He has since gone on to become an established member of the London Irish backline and the club's record try scorer scoring 70 tries; among the most memorable of which were his two tries against Toulouse in the Heineken Cup semi-final at Twickenham in 2008 and his intercept try against Munster in the home victory over the Irish province in the 2010/11 Heineken Cup.

Ojo's career has recently been hampered by injury which hasn't seen him involved in England squads since his debut international season.

He was also part of the successful England Saxons side that won the 2011 Churchill Cup, the same year he was named London Irish Player of the Season.

In August 2016, he was named London Irish's vice-captain alongside teammate David Paice for the club's 2016/17 season.

After 272 appearances, Ojo re-signed for London Irish in April 2017.

In May 2018, he signed a new deal that would see him embark on his 15th season with Irish.

The winger made his 300th appearance for the club against Yorkshire Carnegie, securing his place as the club’s all-time record appearance maker & try scorer with 80 tries to his name in all competitions.

In April 2019, he announced that he would retire from professional at the end of the 2018/19 season after 16 years with London Irish & will move into a commercial position & take on an ambassadorial role for the club.