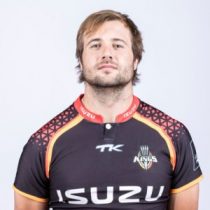 Able to play fullback, flyhalf or centre, the utility made his senior provincial debut for the Bulls in the 2011 Vodacom Cup and represented the South African U20s in the same year.

Beyers then got his first taste of Currie Cup rugby in 2012 and made his Super Rugby debut for the franchise in 2013.

Ahead of the 2017 season, Beyers has made 10 Super Rugby appearances since making his debut in 2013 against the Cheetahs.