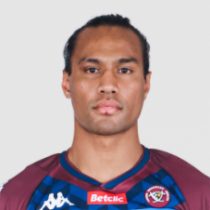 Ulupano Seuteni is a former Australian u20s representitive who made his Super Rugby debut for the Reds during the 2013 season.

Seuteni's skills allow him the ability to comfortably play in the centres, as well as fullback and flyhalf.

His performances in the 2012 IRB Junior World Championship and with the Reds in Super Rugby caught the eye of Top14 giants Toulon.

He made the move Toulon in 2014 he spent two years before signing with Oyonnax.

He helped Oyonnax secure promotion to the Top14 and represented the side in their return to the Top 14 during the 2017/18 season.