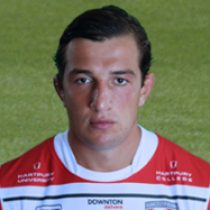 Rapava Ruskin arrived in the UK when he was two years old, growing up in London and beginning his rugby odyssey with Blackheath before joining Western Province's U19 squad.

He was capped by Georgia U19s and then had stints with Saracens and Toulon before moving to Sixways ahead of the 2014-15 season, playing a big part in their promotion back to the Aviva Premiership.

Renowned for his powerful scrummaging, he started out initially as a back row forward, but switched to the front row whilst in South Africa and hasn't looked back.