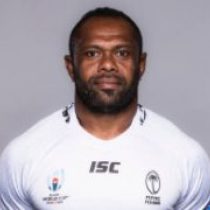 The Fijian sevens ace was discovered by sevens legend Waisale Servi and has just joined the Leicester team after impressing the coaches while on international duty for Fiji. The speedster can play at either centre or wing and is a try-scoring machine.

Goneva scored four tries for Fiji in their match with Namibia in the 2011 Rugby World Cup, and has also previously lit up the fields in France while playing for Tarbes. Goneva has maintained his consistency on the field for Fiji and as a result has earned a spot in their squad for the 2015 Rugby World Cup.

Goneva’s mixture of pace and power made him one of the Aviva Premiership’s most feared attackers during his four seasons with Leicester Tigers prior to joining the Falcons in the summer of 2016.

Scoring 44 tries in his 94 outings for the Tigers in all competitions, Goneva signed off for the club by being shortlisted for European Player of the Season for 2015-16 after touching down six times in the Champions Cup.

In March 2016, it was announced Goneva had signed for Newcastle Falcons at the start of the 2016/2017 season. The Fijian versatile back had spent four seasons with the Tigers.

The Fijian international has been a revelation for the Tyneside outfit, scoring 17 tries in his 28 Aviva Premiership games.

Goneva was the joint top scorer in the Premiership during the 2017/18 season and was named the competition player of the season helping the side to the Premiership semi-final.

He brings a wealth of experience to the Club having to date achieved 55 caps for his country, scoring more than 20 international tries in the process.

In June 2020, Goneva signed for PROD2 side Stade Montis after three appearances for Harlequins.

Premiership Player of the Season 17/18