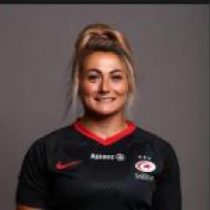 Nuneaton-born Fleetwood began playing rugby at the age of 14.

She moved to Saracens from Lichfield after the World Cup in 2014, where she made six appearances.

As well as being an elite athlete, a personal trainer and a diet and nutrition adviser, Fleetwood was in the same year at school with England’s Manu Tuilagi in Hinckley where she attended Mount Grace and John Cleveland College.

Ahead of the 2017 Women's World Cup, she has made 61 appearances for the Red Roses.