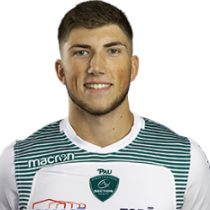 A winger on the rise, Vincent Pinto showed early signs of promise after being selected in both the France u18 and the u20 development side.


A product of the Pau Academy, he went on to make his senior debut during the 2018/19 Challenge Cup against Stade Francais in January 2019.


He was later named in the France u20 Six Nations squad and will look to make his debut in the 2019 edition of the competition.