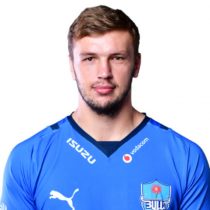 A former Leopards youth representative, Walt Steenkamp made his mark in the Varsity Cup in the colours of NWU-Pukke where he made a valuable contribution in 2016 when the Potchefstroom based university clinched the final against Maties in overtime.

In 2018, he was awarded the prestigious Player that Rocks award, before moving on to the Currie Cup First Division where he made a massive impact for the Leopards.

He made over 30 appearances for the Leopards in the Currie Cup before signing with the Cheetahs in 2018.

The towering lock featured in both the PRO14 and Currie Cup sides for the Cheetahs and in doing so caught the attention of Jake White who brought the second-rower to Loftus on a two year deal with the Bulls starting in November 2020.