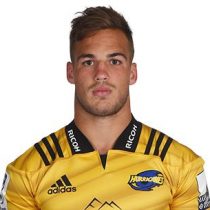 South African born Goosen, has represented NZ Schools and won the Junior World Championship with the NZ side in 2015.

The South African born back is capable of playing in the midfield or wing. A strong fend and very quick feet make him a handful for any defence

Goosen made his provincial debut for Wellington in 2014 in his first and only match of the season for the side. However he became a regular the following season and scored two tries in nine matches. Things just kept getting better for Goosen as he was an ever present in 2016, helping himself to 4 tries in 11 games.

A Wellington ITM Cup player and made the Hurricanes Super Rugby side for the 2016 season.

Goosen impressed the coaching staff enough to graduate to the full squad in 2017 and made his first start on the wing against the Waratahs in round seven.

He was capped only one other time during the 2016 season and was included in the Hurricanes 2017 Super Rugby squad.

Although he is primarily a centre Goosen spent the majority of the 2017 on the wing and was the first choice wing by the time the Canes were in the Super Rugby semi-finals.

He scored 8 tries from 11 appearances in his second season with Canes and came off the bench to score a crucial try for Hurricanes as they drew with the British and Irish Lions.

In March Goosen re-signed with the Hurricanes until the end of the 2020 Super Rugby season.

By the end of the 2019 season, Goosen had scored 19 tries in his 37 appearances since he made his debut in 2016 against the Reds when he crossed with his first touch in Super Rugby before signing a further extension with the side until 2021.

Ahead of the 2020 Super Rugby season, Goosen has obtained 37 caps.