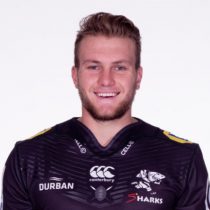 A versatile forward Vosloo represented the Leopards at youth level before he joined the Sharks Academy after school.

He made his first class debut for the Sharks during the 2015 Vodacom Cup.

In 2017 he was named in the Sharks 2017 Currie Cup squad and made his debut against the Cheetahs.

In December he signed a new two-year deal with the Sharks.

In January 2018 Vosloo was named in the Sharks Super Rugby squad and will look to make his debut in the competition.