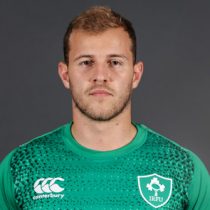 Hailing from the Cumbria area of England, Addison was educated at Queen Elizabeth Grammar School in Penrith and then continued his education at the University of Manchester.

A product of the Sale academy, Addison is a versatile member of the back division who can operate comfortably at either wing, fullback or centre.

He made his first-team debut for the Sharks in 2011 and also represented England at U20 level.

Addison penned a three-year deal with Sale in October 2016 & was given the captaincy for the 2017/18 season.

In March 2018, Addison announced that he would be leaving Sale at the end of the 2017/18 season to join Ulster in the Pro 14, having made over 100 appearances for the Sharks, scoring 150 points.

After almost 10 years with at Sale, Addison chose to pursue his ambition of playing international rugby in Ireland, having qualification through his family.

After an instant impact at Ulster, he earned a call-up to the Ireland squad for the 2018 November Tests.

In October 2018, he was named as one of two uncapped players in Ireland's squad for the Rugby Weekend fixture against Italy in Chicago.

Addison suffered a season-ending back injury that ruled him out for the majority of the second half of the 2019 season and it was thought that he would also miss out on the opportunity to play in the Rugby World Cup after undergoing surgery in April.

However, he recovered ahead of schedule and took his place in the squad.

Addison was also named for the 2020 Six Nations Ireland squad with 4 caps to his name.

In May 2020, the Ireland international agreed to a new two-year deal to remain with Ulster Rugby.